Financial markets initially reacted in a knee-jerk manner following the Brexit vote and money went into ‘safe havens’ assets such as cash, government bonds and gold. However, markets have since calmed, leaving investors to digest what it all means.

Where to from here?

Once it ratifies the Brexit and invokes article 50 of the Lisbon Treaty, the UK has two years to renegotiate trade. So at least in the short term, trade should continue as is. In fact, the fall in the British pound may actually help improve trade.

The implications for Britain in the long term may well be benign or even positive. An exit would remove a seemingly unnecessary layer of bureaucracy that interferes with every aspect of daily life and costs taxpayers money. This renewed sense of independence and self-determination may boost spending, investment and employment. 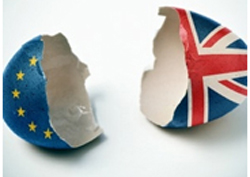 While Britain negotiates new treaties, short-term disruption and uncertainty may cause an economic slowdown which could slow growth rates in Europe. The Brexit may accelerate the end of ‘Great’ Britain. Scottish and Northern Ireland voters actually voted to remain in the Union, leading to renewed calls for Scottish independence and the reunification of Ireland.

Another result of the vote is that it may accelerate fragmentation of the EU and Eurozone. It will certainly embolden anti-EU parties across the continent and there are already movements in France and the Netherlands. Further political unrest could delay investment spending, leading to slower economic growth and higher unemployment.

Will Brexit trigger a financial crisis?

Europe has been strengthening over the past year – so it appears unlikely it would plunge into a recession and drag the world down. That said, central banks globally are poised and ready to take charge if necessary. The Bank of England is expected to cut interest rates and introduce stimulus, while the European Central Bank is likely to ramp up its stimulus measures.

Aside from this, the financial system is actually on a much stronger footing than it was before the global financial crisis. Tighter regulations and more conservative lending standards from banks mean they are better positioned to manage market volatility.

Change takes time and the Brexit is a huge task. What this may mean, is that the delays along with efforts from central banks to support economies through the change, may help offset any potential negatives.

While the Brexit may have an impact on Australia through direct trade with the UK and Europe, it’s not likely to have a major influence on Australia. For example, today Britain accounts for just 1% of Australia’s export market. What is more likely to matter is whether the RBA cuts interest rates, the Australian dollar falls or the stimulus efforts by other countries to support their economies.